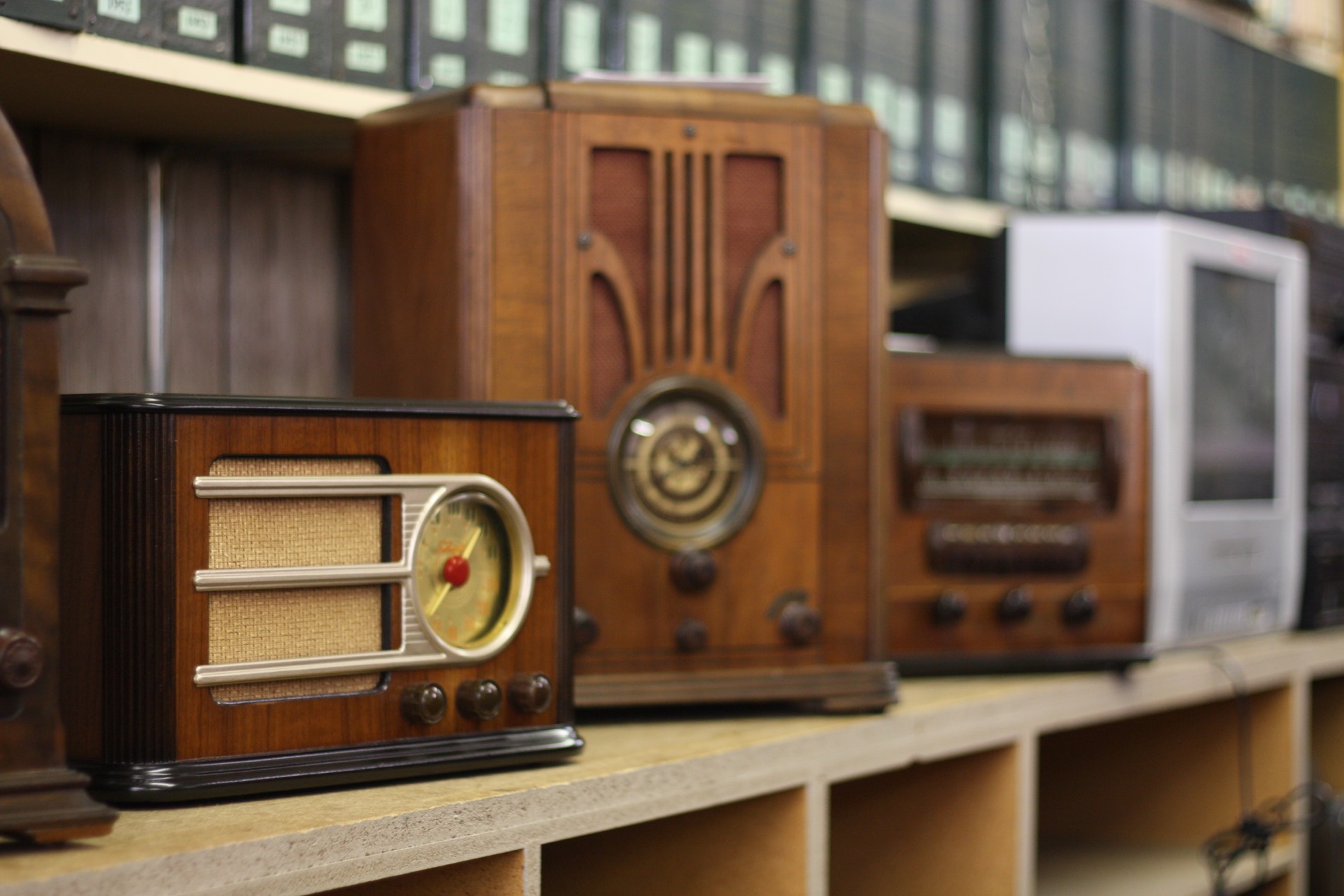 This month’s radio is our pristine 1934 Wards Airline Tabletop radio. Part of the radio’s most striking quality is its exterior. Wood cabinet units- radios and phonographs alike- hold such a beauty because they are able to wear history with ease yet can be re-finished to luxury. We thought we would take a moment to capture a brief history of wooden cabinets and pinpoint some of their most outstanding attributes.

A majority of our level 1 restorations are wooden cabinets most notably because of their resilience. Unlike bakelite units which wear and tear much more visibly, wooden cabinets are more malleable to “damages”. This allows more wooden cabinets to survive the test of time. Wood console units can be stripped and re-stained to look as if you were purchasing this unit for the first time, as can the tabletop units. They were the Cadillac of the American household during their heyday and they have remained as such as they grow into vintage or antique.

Radios were first produced using wood in the United States during World War I. Around this time the first nationwide radio networks were developed. Companies such as American Telephone & Telegraph, Radio Corporation of America (RCA), and General Electric knew their newly invented software was going to need hardware resulting in the addition of wood. Atwater Kent was one of the first companies to pioneer the “breadboard” in the 1920’s. The breadboard radios arranged the tubes and coinciding components on a wooden board to create a “unit”.

Soon after the breadboard, radio companies knew that they could capitalize on their units as entertainment, thus the cabinet was created to hide all the “guts”. The original cabinet radios were plain and simple with a wooden box formation. Following the plain start of cabinet radios, companies like Zenith took a polar opposite approach the new invention. The next wood cabinet models produced are still categorized today as some of the most lavish; the tombstone and the cathedral.

Radio cabinets continued to solely be manufactured in wood up until the 1940’s. By then small tabletop wood cabinet radios had expanded to the pinnacle console radios. The 1934 Stratosphere console radio manufactured by Zenith was sold for the same price as a Buick when it debuted; this console radio is still regarded as the most exquisite.

Once the Great Depression hit, companies started creating thermoplastic resins to create cheaper alternatives to wood cabinets. Bakelite and then Catalin were introduced and displaced wood in radio cabinet production. The thermoplastic options became the material of choice since it was cheaper and easier to mass produce these now common household items.

Before radio cabinets were produced with thermoplastic, radios were considered elite and often took on the role of a household centerpiece. Producing with plastic allowed for the radio industry to expand and gain more movement as a product. However, wood cabinets still hold this pristine, grandeur quality that makes them feel just as special as they did in their heyday.

This month’s featured radio is no exception. In addition to our Ward Airline tabletop radio we have Philco, Zenith, and Crosley units all produced from wood available for purchase on our Etsy shop. Interested in some of our wood cabinet restorations? Check out our Facebook photo albums.

In 1962 Scott M. Phillips Sr. transformed his hobby into an out-of-home business while still…

Recent Posts
Archives
Categories
We are located in the beautiful hills of upstate New York. Click on the contact link to the right for the complete mailing address
Get In Touch

Need help with shipping your radio, phonograph or Turntable?